The emotional experience of Flow

A flow state is often characterized as optimal human experience. It’s an experience where you are fully focused and energized in what you’re doing, often experiencing a high level of creativity and losing track of time. 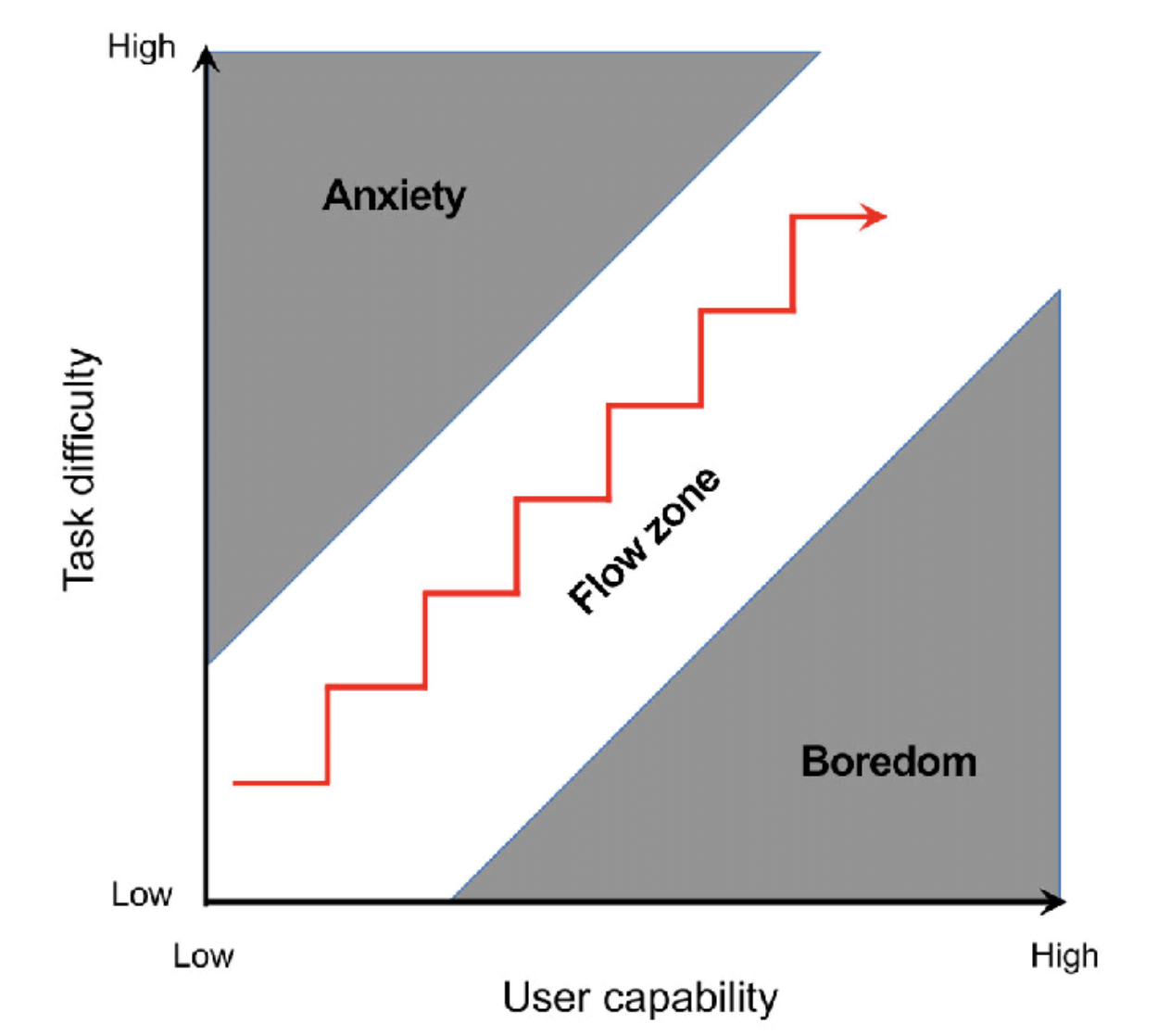 The general emotional experience that is being described here is that when a task is too challenging for a user’s current level of ability, they’ll get frustrated and give up. Alternatively, when the task is far too easy, they are likely to experience boredom. Both of these are potential Intentionally design for failure states where the user may lose interest in the app.

As a rule of thumb, I find it best to match the difficulty of the task with the skill level of the user.

The model feels, in a sense, incomplete. I argue that difficulty matching in conjunction with Goal Resonance that produces positive emotions in users.

People start using an app with different prior skill levels. Somebody might start to learn how to use an app and they pick up on it quickly because they have a high prior skill. On the flip side, other users might not get it immediately.

If I can only provide value at one skill level, then users at that skill level are the only ones I can count on sticking around.

Duolingo gives you a placement test at the beginning of your experience that allows you to skip a good amount of content. This is useful so that people like me who come in already knowing a good amount of Spanish don't get bored being forced to review how to say "boy" or "girl" before we get to the content that's actually interesting to us.

An alternative approach might be starting the user off with simple tasks and, based on their performance, you can escalate, de-escalate, or maintain difficulty level for the next task. In game design, this is referred to as Dynamic difficulty. Resident Evil 4 does this, where if you are fighting zombies and dying frequently, they'll give you less zombies with less strength. Alternatively, if you're constantly successful, they'll present you with a greater challenge.

Apps with continued user involvement are responsive to increasing skill levels over time because User skill level increases over time.

My thoughts on this sort of mesh difficulty matching with the Fogg Behavior Model.

If what users are being asked to do is too challenging to do in the present moment or they simply don't care enough, then they won't do it and it will be forgotten. If this happens too often, then the user may fall into the habit of ignoring push notification.

The app doesn't know what is going on in the lives of the user in the moments when they send a notification, so if there is only one behavioral response to that notification, then the app is betting on serendipity.

An example of this is how some email apps allow you to snooze an email to return to your inbox later as a possible response to seeing the email. This is to account for the difficulty of the ask (respond to an email) being too high for your current level of motivation and ability.

Resident Evil 4 is a zombie survival game where if you are playing well, then they'll send more zombies your way and the zombies do more damage. If you have died multiple times in an area, then the opposite occurs. The developers never explicitly discussed this, because it could be seen as punishing success, even though this generally functions to keep the player within the range of optimal difficulty described in the flow model. 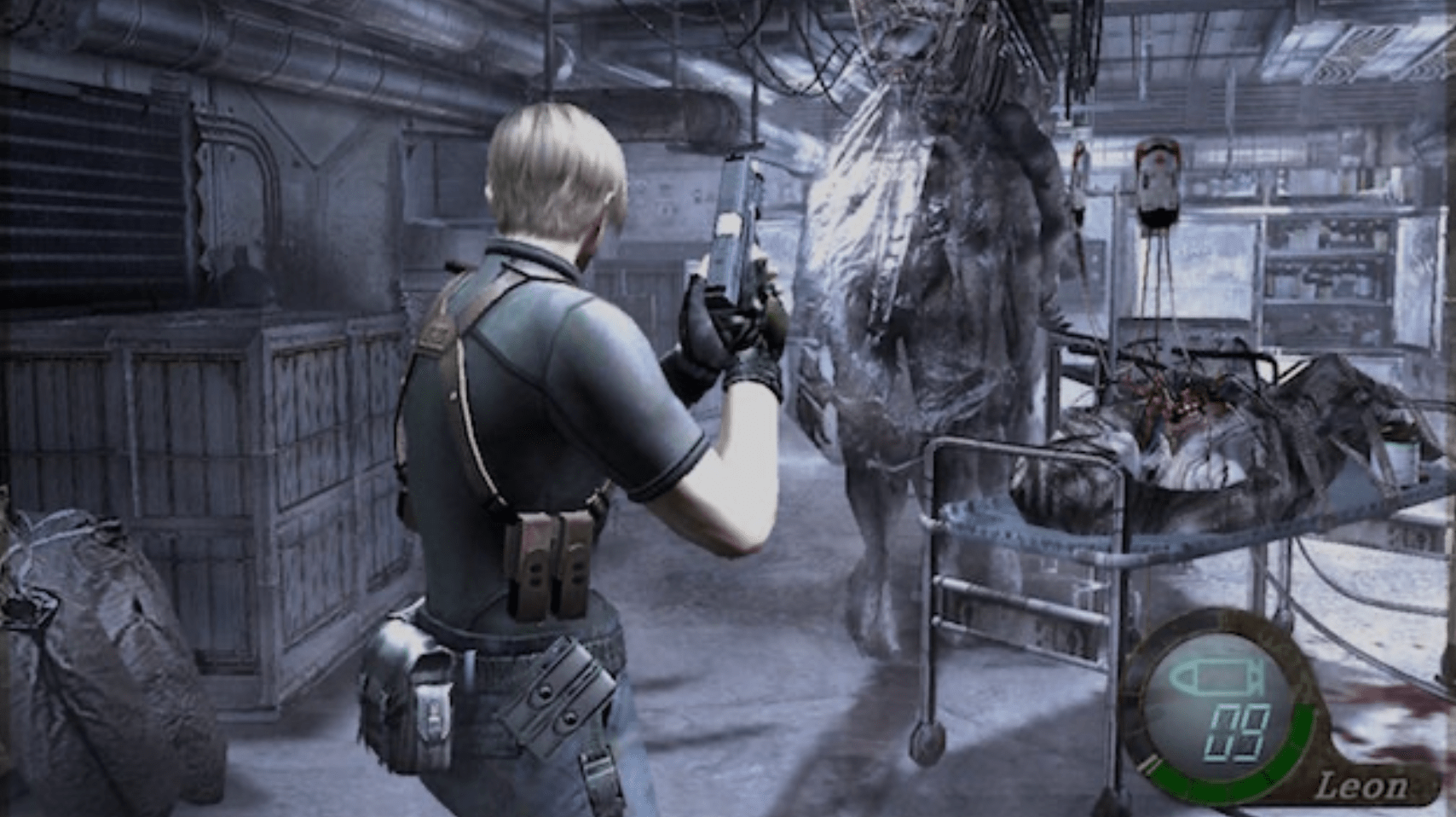 Duolingo is a language-learning app where they give you a placement test upfront. If you perform well then you'll skip to a later point in the user journey so more skilled language speakers don't get bored. This isn't exactly dynamic difficulty since it comes upfront rather than adjusting based on revealed skill, but I'll include it anyway.

In games with a linear difficulty curve, every player experiences the same progression in difficulty from beginning to end, allowing for an authored user experience.

Fabulous is a habit/routine tracking app built in collaboration with the Center for Advanced Hindsight in order to help people form healthy habits. Every user is started off with the goal of drinking a cup of water first thing in the morning for three days in a row. Once the user has shown themselves to be capable of this morning routine, other activities are added to their routine, one by one, in a slowly escalating difficulty curve.

Many users who have worked with other habit trackers before may get bored from the slow and easy start. However, if users had the agency to give themselves more challenging morning routines, then they may be too ambitious and give themselves harder goals than they can handle. Fabulous is targeting people who are struggling to form healthy habits so they are okay with restricting the user's agency to adjust their own challenge. 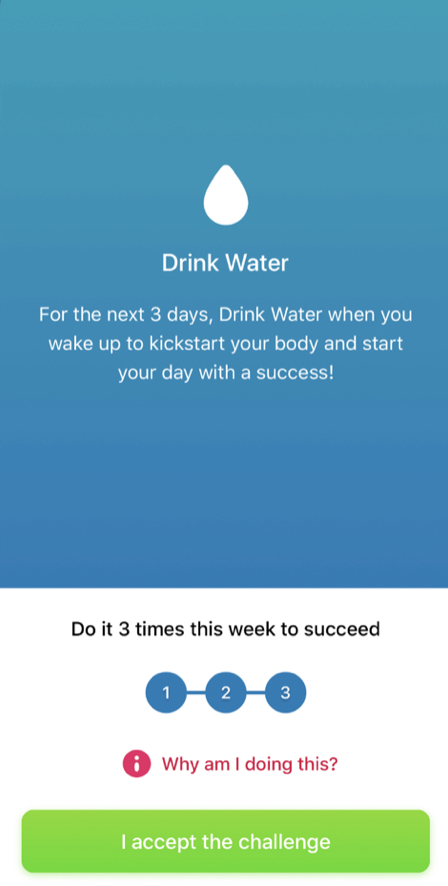 When well executed, it makes clear to the user exactly how they can achieve a higher score. More challenging playstyles are more rewarding, often because the incentivized playstyles are simply the most fun. As far as I can tell, scoring based difficulty is under-explored in apps.

In Sonic the Hedgehog, at the end of a level, you receive a score that is broken up into categories. A high score means you moved through the level fast, you did tricks, and you collected rings. In other words, a high score means you played through the level in a challenging way that is possibly the most fun way to play. It signals mastery, which many players desire. 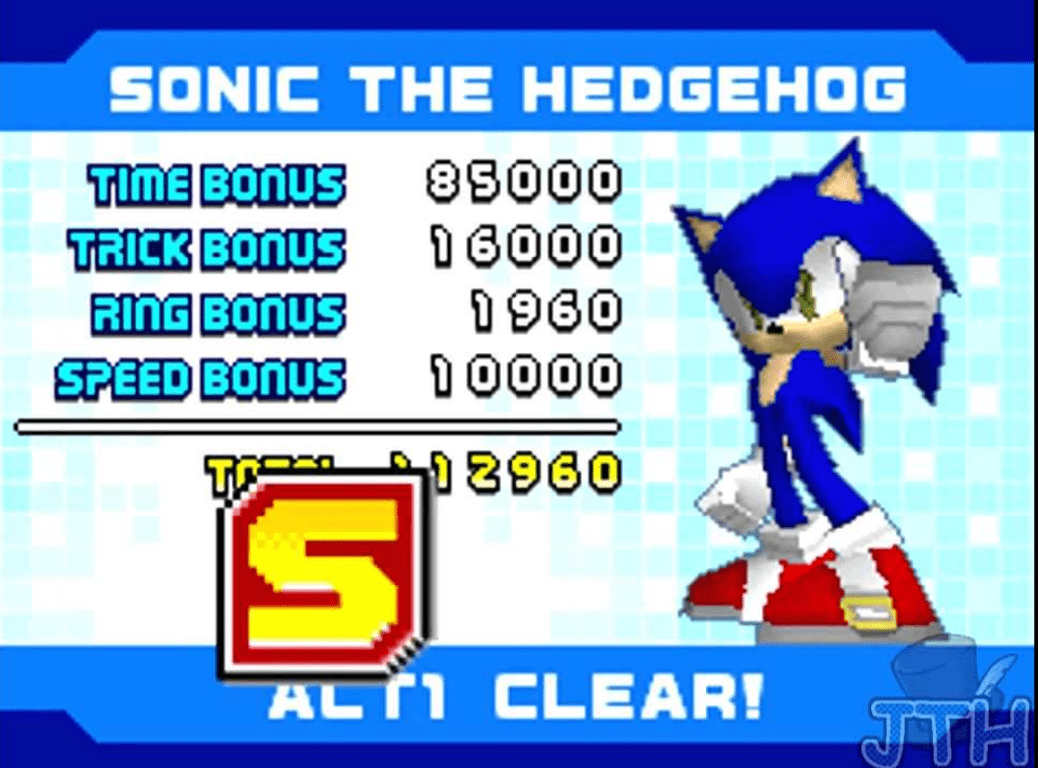 Opus Magnum is a problem solving game where each problem you're given has a million different solutions. After completing a problem, your solutions are compared to the rest of the world based on three histograms, which represent three different scores placed into the context of social comparison. The line in the histogram being further left means you're doing better than more people. You have the opportunity to redo the problem and attempt to find a new solution if they are dissatisfied with any of their scores.

I love this implementation of scoring based difficulty because it uses social comparison to help the user to judge what's good and bad. I distinctly remember solving one of the early puzzles only to realize I performed worse than average on cycles (the efficiency of the machine I built). I thought to myself, "I'm better than that," and proceeded to spend another hour or so coming up with different solutions to a problem that I already solved.

Grammarly takes a similar approach to Opus Magnum, using social comparison to help the user determine what scores they care about achieving. Additionally, they compare your performance to your past performance, reinforcing a goal around improvement. This is effective because productivity, grammar mastery, and vocabulary are all meaningfully related to writer goals. 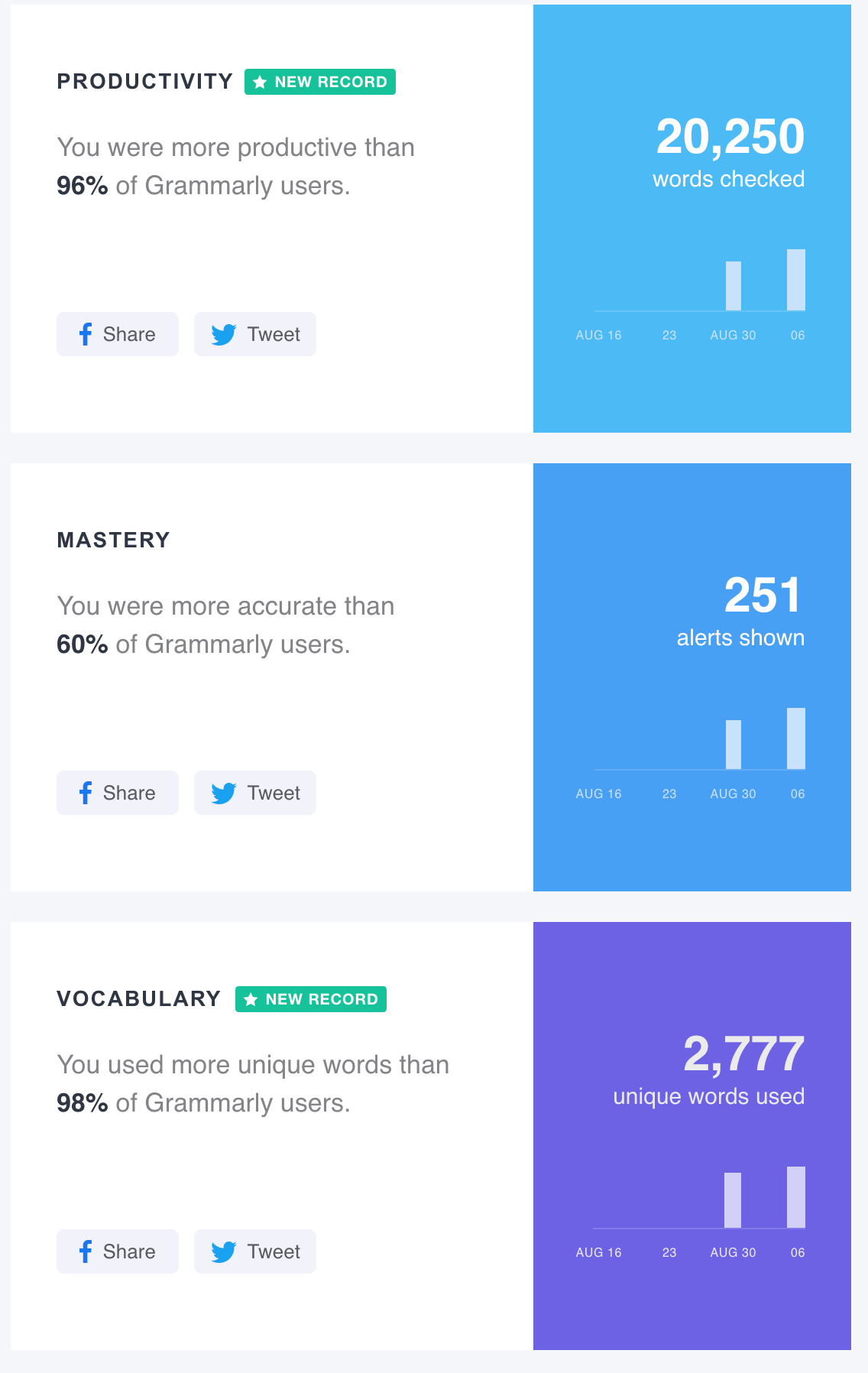 With difficulty level selection, the user makes a choice about how much effort they want to commit to the game.

Steamworld Heist lets you select your level of difficulty before you start playing. Harder difficulties reap greater rewards. People in general like to see greater effort lead to greater reward, regardless of what app they are using.

The problem is of course that people don't have a mental model for what each difficulty level means before they start playing the game. Steamworld Heist addresses this problem by making the parameters of each difficulty level explicit for comparison. This doesn't remove the problem though, so difficulty isn't just a choice you make upfront - you can change it at any point! 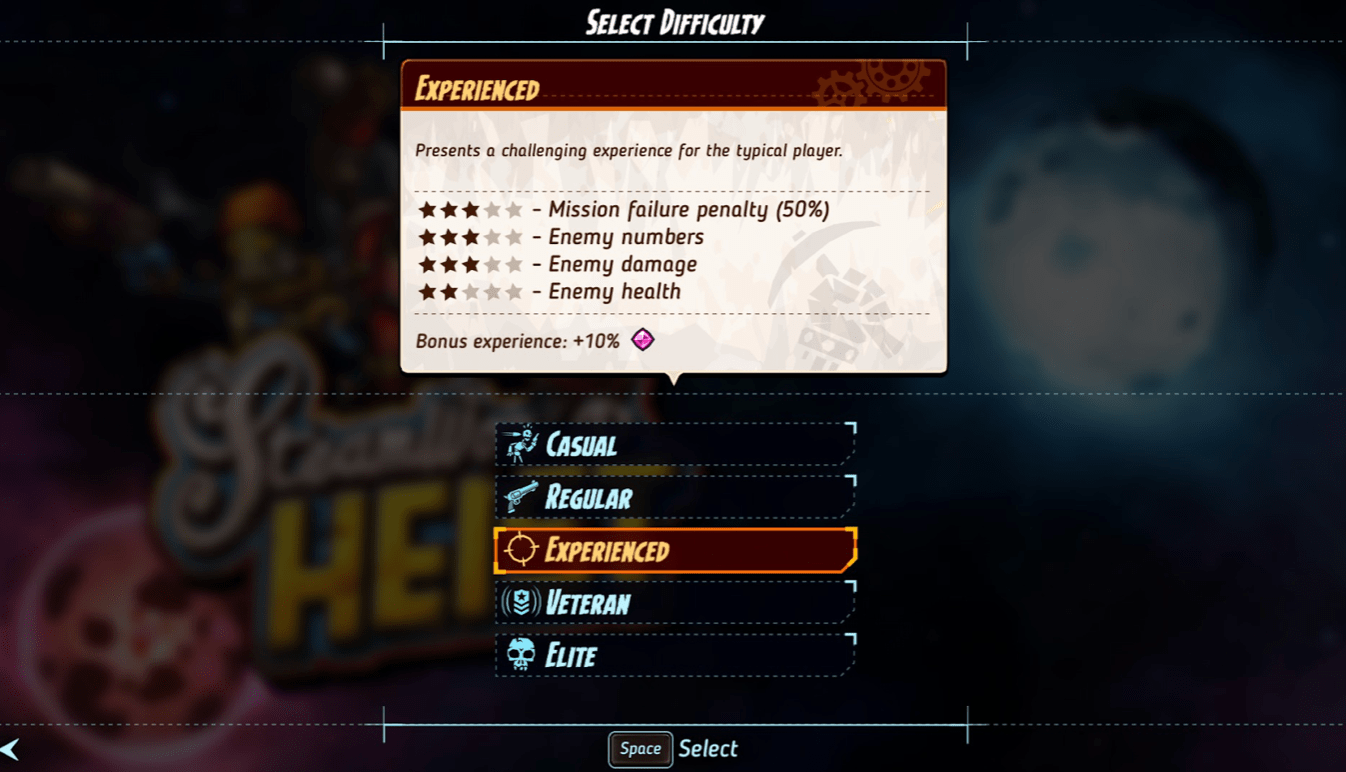 During the onboarding, Duolingo asks you to select how much you would like to practice per day. Notice how it lets users change their goals later? This is because they want the user to continue their success even if User goals change over time. Additionally, it reduces the pressure to make the "right" decision during the onboarding.

One difference that you may notice between this and the Steamworld Heist implementation is that even though you do reap greater rewards with greater effort in both systems, Duolingo doesn't point that out. I wonder why? 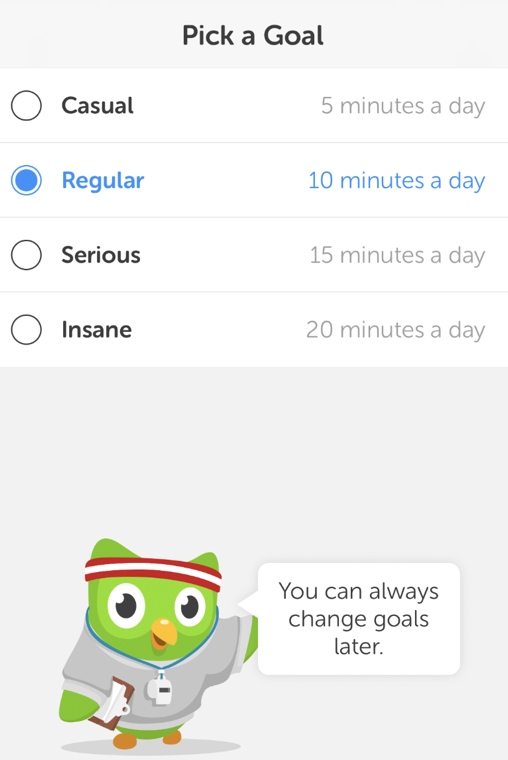 Near the beginning of a person's personal productivity journey, they may be fine with using Apple Reminders as their form of task manager...

[[New users do not yet have the vocabulary to understand the app]], but as [[User skill level increases over time]], so does their vocabu...

Eventually user skill level will reach the limitations of the software

I'm learning more and more that a user's expectations going into an app are key. When I started playing a game like Dark Souls, I had the...

Help the user to recognize situations for functionality usage

[[User goals change over time]] as [[User skill level increases over time]] so being aware of the features generally means you’ll be awar...

People start using an app with different prior skill levels

One of the companies I work with, GuidedTrack, is a simplified programming language that allows subject matter experts to create web appl...