Note - GuidedTrack gave me permission to share a plan for onboarding that I wrote for them late October. At this point, we had been working together for a few months and this is an iteration on plans we were already working on. Certain aspects have been updated (which I mark with UPDATE) and certain aspects have been added (not in this post, will likely come in future posts), but we're implementing most of this. This post was originally written for the GuidedTrack team, so it assumes some knowledge.

If we are to launch GuidedTrack near the beginning of next year, we should have a clear outline of what our current plan is.

Self-efficacy is the belief that you are capable of doing some action. You can view my page on self-efficacy for more details.

What's important for our context is that, with high self-efficacy, people care more, adopt more of a growth mindset, and have a higher tolerance for friction. As such, building self-efficacy is a valid method to Intentionally design for failure states.

GuidedTrack is easy to learn but initially intimidating to non-technical people. People who don't view themselves as coders see code will assume the Difficulty Matching is out of wack and think it's for people who can program (read- not themselves). They won't even try. We know from our user feedback that GuidedTrack is in fact fast and easy to learn for people who try and respond to failure well. Increasing their self-efficacy is how we'll influence them to give it a shot.

When users see code and they can’t predict what the outcome will be, they can be intimidated.

Seeing error messages (literally nonexistent for most apps they use) is intimidating, but they are inevitable obstacles in the user's early learning experience. A text interface for program creation allows people a lot of freedom to be creative and to mess up!

In this context, a feedback loop is referring to the process through which people learn through trial-and-error. It's generally well represented in the flowchart below. 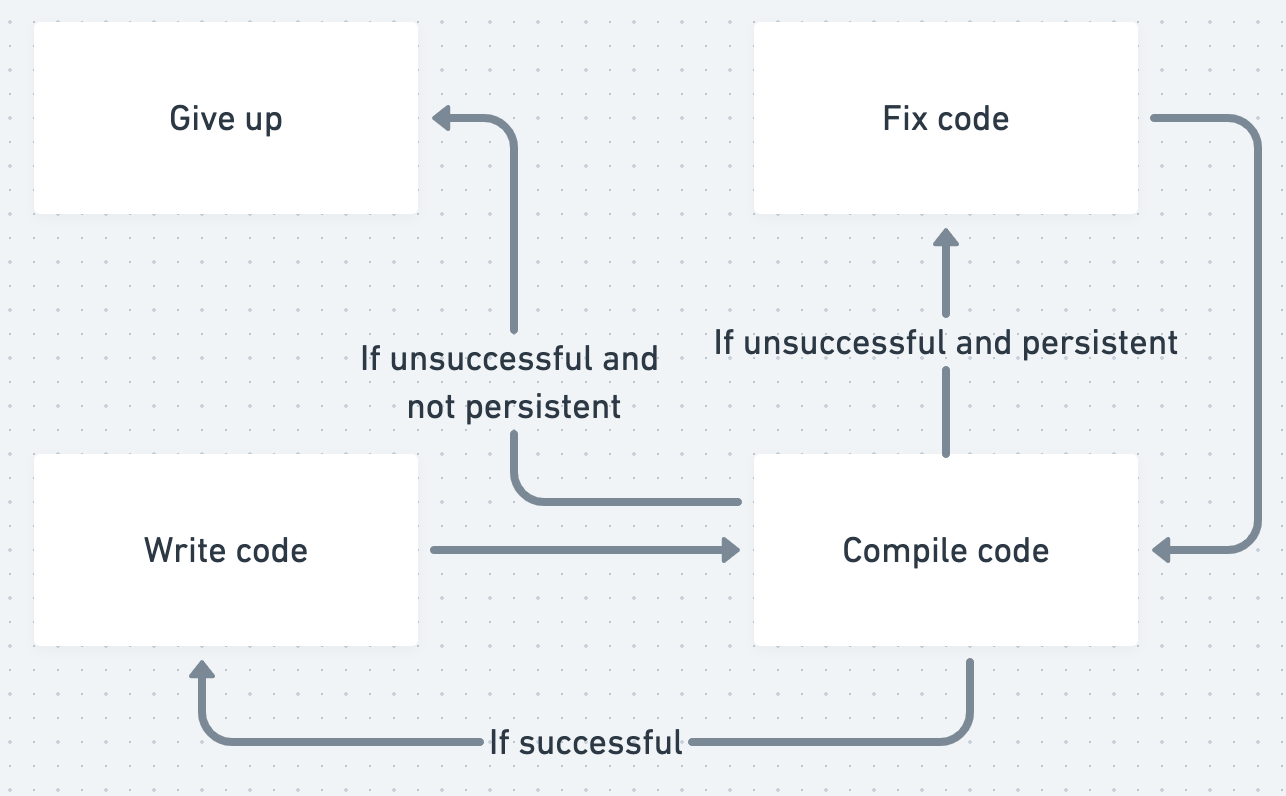 The more time users spend writing code before checking their code in compilation, the more errors will potentially build up. The more errors are built up, the larger the failure state and the worse the user feels. Real-time in-editor error codes has the potential to reduce this problem by showing the user errors as they happen so they can be fixed one at a time, giving users immediate feedback.

The side-by-side preview/debugger will make it so the user can see highlighted exactly the code that is producing what they see in the preview. They will know where errors that don’t produce error codes are. The user edits code and then is able to refresh the preview to quickly see the result alongside the code that produced it.

The current version that Lyudmil and I have discussed (which I would be happy with for version 1 that gets released with onboarding), you edit code on the left and the click refresh on the preview on the right to start it over with the updated code.

Ideally, it would be the case that you can edit a line of code, refresh the preview, and see what’s shown on the screen you just edited. Lyudmil has mentioned that there are conceptual and technical challenges, Spencer says there might be some 80/20 solutions that get us most of the way there. If they can figure this out, then this minimizes the time between editing code and seeing what happens as much as possible, giving users the immediate feedback needed to make accurate predictions of what their code will produce.

UPDATE: We're working on an auto-updating version. It's difficult, but from user interviews it seems like it will very clearly be worthwhile to have the preview automatically change in response to changing code. The side-by-side preview has been like a night and day shift in how learnable and approachable GuidedTrack is. Pretty much everyone expected it to auto-update, and it will make the programs significantly more interactive, tightening the feedback loop even further.

The challenge here is with users who are excited about learning GuidedTrack and want to play around with it but don’t have an idea for what programs to build immediately (see: The user may have a lack of imagination as to what user goals they can accomplish). We don’t want that scenario to make GT a nonstarter for that user! The most successful app adoptions come from a project, in this case because it will engage the user in feedback loops that we know will help them learn how to use it.

Here’s what I see as doable and impactful before launch

When the user is on the website, they should be able to understand what GuidedTrack is and how it fits into the context of their life and goals. They should feel the self-efficacy necessary to know that it’s worth giving a shot.

People should be able to see use cases so they can latch onto examples. This will help them realize how it fits into their life and goals. Ideally, these use cases would come along with simple and short GT programs that they can see with the side-by-side preview/debugger. This shows the user exactly what GT is and demystifies it from coding languages. For many users, the “aha moment” is when they realize they are capable of reading code and predicting the result. If the programs embedded on the website have side-by-side preview and are simple, I predict this would enhance self-efficacy.

People should see successful similar others to increase their self-efficacy. This means that they can see testimonials from researchers, entrepreneurs, and educators.

In order to bring the user to the “aha moment” that they are capable of reading and producing GT code more quickly, we’ll give them an onboarding questionnaire with the new side-by-side preview/debugger running. The fact that it highlights the active code will make it easier to understand and show off GT’s functionality, increasing self-efficacy and excitement.

The open question I have at this point is which of the following options would be better:

We could run a test with both versions on this. I’m curious to see which group would continue to log on the most after completion, or if either group has a higher likelihood of the user creating their own program.

Update: We're going with option number 3. Just showing the onboarding questionnaire on its own will get people used to what the output of a program is before we ask them to look at the code. We'll still make the program's code visible for people who want to look at it though.

In the prior onboarding questionnaire, we were holding the user’s hand. The user exploration phase refers to when the user is trying to learn on their own. This is when they’ll make their own programs, read through sample programs, ask questions to the community, and explore instructional content.

Users tend to be most successful when they start with some project in mind. On the flip side, they may drop off and give up if they start a program with a blank page and don’t know what to do with it.

From the user interviews, it seemed that playing around with the toolbar and looking at the code in sample programs was an effective way to learn. We don’t need to hold the user’s hand for this, though I would make the sample programs directly editable so the user can play around in a sandbox and I would simply add a couple more sample programs. I also believe that the side-by-side preview/debugger will significantly improve the learning that comes from exploring existing programs.

I was thinking one of the best ways we could help the user start with a project is to have an option to create program from template. Whenever people make a new program, they can either start it from scratch or from a template. Starting from scratch would be the default state. If the user selects to start from a template, then it would open up a drop down menu. The code from the template they select will be pasted into the new program. We can rework the worksheets we made previously into templates, and this would be a replacement for the way that we currently give new users sample programs. 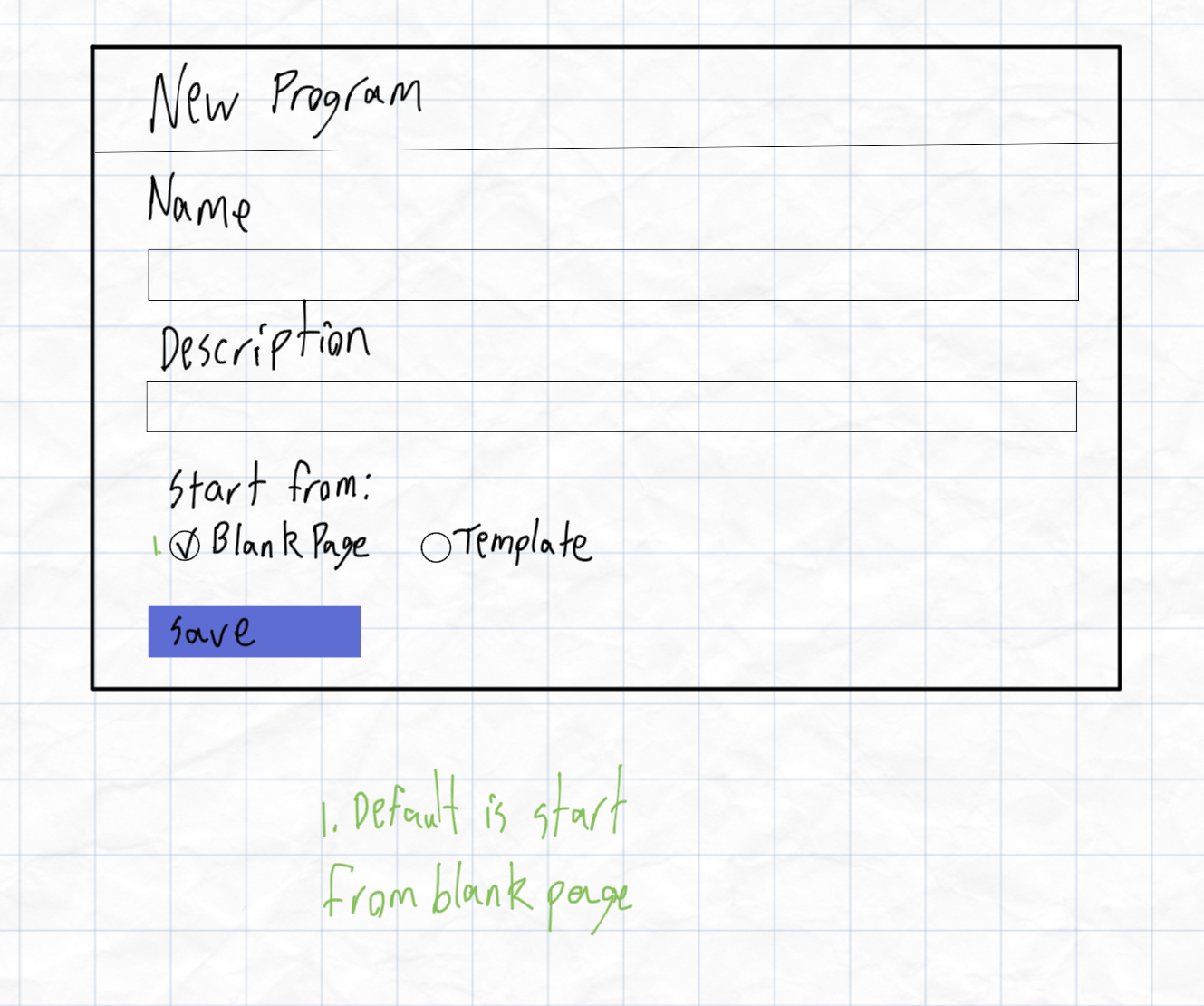 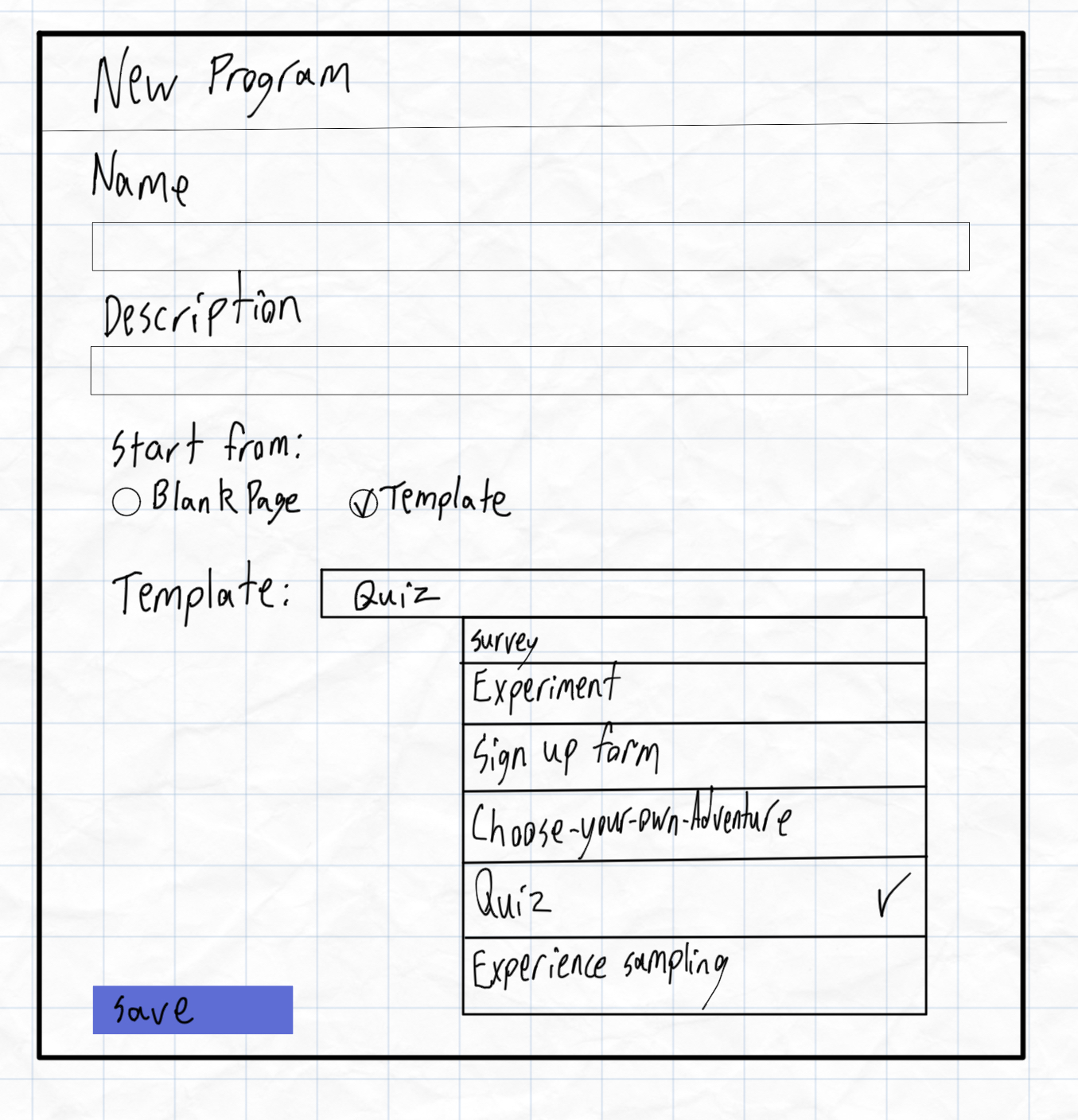 Update: We're thinking that it would actually look better like this. Turns out this isn't too hard to code, so the overly simple UX in the images above aren't necessary.

Some examples of template could include:

To start out, it would be best to include a premade set of templates. Long-term we could allow the user to have a folder of templates that they can add to, enabling crowdsourcing templates and enhanced workflows.

The user exploration phase will also be enabled by an online community, which I elaborate more on in the next section.

An online community is basically table stakes at this point for complex products, and it’s for good reason. Sometimes you just need a human to answer a question, and especially in the early days of a professional product with exciting potential, it is invigorating to explore the product’s capabilities together. In order to gain momentum, we need mass and velocity, but I would emphasize that velocity is likely more important than mass. People need to know that they can start a discussion or ask a question and reliably get a response. We can plant some people from the GT team within the community to ensure this velocity. Common questions should be compiled by the team into a publicly available resource online, likely our Q&A website where everything is google searchable.

In order to gain mass, I propose inviting all users into a Slack group as part of the onboarding, whether it is at the end of the initial questionnaire or as an email. Slack has an advantage over our current Facebook group insofar as we’ll be able to make sub channels and it tends to encourage a higher velocity of interactions.

In addition to answering quick questions, the Slack community has the benefits of facilitating professional connections and providing inspiration.

Frankly, there's a lot we can do with just video. We can have a short introductory course, cover advanced subjects, have walk through videos with users to show off real use cases, and make 1-5 minute workflow explainer videos as we go. In comparison to a blog post, YouTube is great at showing implicit processes that an experienced user might not think to write down.

For many people using a complex product, their first instinct is to search YouTube. I recommend we start with a few videos that explain the basics. This includes the flow of a program, indentation, what determines a page's beginning and end, those sorts of things. We can also upload clips of past recorded workshops and demos.

As we progress, I think it would be a good idea to just get into the habit of making 1-4 minute video explainers of little things you do. Loom is a really low friction way to record screen video.

Update: This video discusses the flow of GuidedTrack programs. I explain a lot in a short period of time and it would probably be best to break down each of the core concepts into a two minute video of its own.

Feedback loops are a more efficient method of communication

I'm trying to train my dog not to jump on the bed while I sleep. Up until recently, we've had him sleep in the crate at night, but ideall...